Publication day for the book that brings together much of what Gerry Gaffney and I have learned about creating better forms over more than a decade of practice, consultancy, teaching and research. 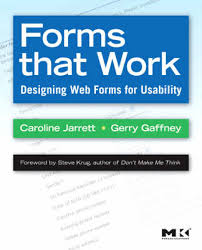 Here is what the publishers Morgan Kaufmann have to say about Forms that Work: Designing Web Forms for Usability by Caroline Jarrett and Gerry Gaffney:

“Forms are everywhere on the web – for registration and communicating, for commerce and government. Good forms make for happier customers, better data, and reduced support costs. Bad forms fill your organization’s databases with inaccuracies and duplicates and can cause loss of potential consumers.

“Designing good forms is trickier than people think. Jarrett and Gaffney come to the rescue with Designing Forms that Work, clearly explaining exactly how to design great forms for the web. Liberally illustrated with full-color examples, it guides readers on how to define requirements, how to write questions that users will understand and want to answer, and how to deal with instructions, progress indicators and errors.

Buy a copy of Forms that Work: Designing Web Forms for Usability

Here are some things about the book that we are particularly proud of:

Caroline talks about the book with Tom Johnson of I’d rather be writing.

Reviews of Forms that Work

“The humble form: it may seem boring, but most of your website’s value passes through forms. Follow Jarrett & Gaffney’s guidelines, and you’ll probably double your online profits.” – Jakob Nielsen, Principal, Nielsen Norman Group

Assure Dynamics, developers of dynamic forms and online systems, recommended our book in their blog post Laying out a form. November 2010.

Arshi posted a long set of notes about the book on her blog R-She-Yeah: Thinking about forms and usability. May 2010.

Foraker reviewed our book on their website Usability First, March 2010.
“This book brings to light the idea that good form design isn’t just about looks—it’s about making sure you’re asking the right questions so your users understand how to answer”.

Jim Lesko of Supply Chain Technology – The Portal: a look under the hood mentioned our book as a resource in his post Finding good UK design tips for business applications, February 2010.
“an easy-to-follow, common sense approach that anyone having an interest in web design can pick up and process to make their user interfaces better”.

Dan Croxen-John of Applied Analytics reviewed our book: The Science of Online Forms, February 2010
“Let me start with my conclusion first – if you like waiting to the end of anything to know what someone thinks, I’m sorry I am not that kind of book reviewer – this book is better than you think it is”.

Guy Wyant included our book in his Christmas reading: Jeeves is About Usability, Too. January 2010
“This was a quick read; short but solid. Most everything was review for me, but for those just starting with web forms, this would be great”.

Ayesha Habeeb Omer included “Forms that work” on the List of books you would want to read in the year 2010, December 2009.

Matteo Caprari reviewed our book on his blog, October 2009.
“There is no html in this book, it’s not about programming forms. And that’s why I liked it.”

Bennett McElwee reviewed our book and created a summary of key points from it on his blog, Semicolon, September 2009.
“a practical book dedicated to making web forms usable and useful”.

Neil Allison mentioned our book on his blog, Usability Ed. August 2009.
“Forms that Work is a book that nicely compliments Ginny Redish’s Letting Go of the Words. Both sit on my bookshelf”.

Holly reviewed our book on her blog, All about website usability, June 2009

She particularly liked the idea of ‘Forms protocols’:
“But one of the best tips in the book focuses not on the form itself, but on working with the person requesting the form:  always use a “form protocol” on which the requester must specify, for each and every field, who needs it and what they’ll do with it”.

Alice reviewed our book on Goodreads, June 2009.
“This book is staying on my “consult” shelf next to my desk. I expect to look at it often”.

“The authors follow their own advice to demolish the walls of words. Don’t let the simplicity of the format delude you into thinking there isn’t any content. It is packed with great illustrations to explain point by point yet it isn’t overly burdened with heavy text. The book goes step by step on how to define requirements, write questions and instructions, select the proper web tools and test”.

Gabriel reviewed our book on his blog In usability we trust, April 2009

“I found Forms that Work fun and easy to read. It’s filled with illustrations and real-life examples, which makes it easy to understand how to put the concepts into practice. What I love about this book is that it’s compact and succinct. The authors deliberately decided to keep the book under 200 pages which I think was a very wise decision.

The nitpicks I have is that I found quite a few typos. I also sometimes felt that the illustrations didn’t quite had the quality that I’d expect from a book like this. That said, these are only minor complaints and ones that shouldn’t prevent you from reading this otherwise excellent book”.

We made it onto Craig’s list of 12 Really useful usability books, March 2009

“I’m kind of surprised that this book didn’t sell out shortly after printing. By reading and using this book, any web site manager that has forms on his or her web site could probably double conversion rate!”

“Forms That Work is filled to the brim with everything you need to know to make a form that will produce results. It is a definite addition to any web worker’s reference shelf”.

James wrote a review on his blog, qwertyphilia, February 2009.

A second edition of Forms that Work?

Question: Will you be creating a second edition of “Forms that work”?

Answer: No. Writing a second edition would be very time-consuming, and we’d rather spend our writing time publishing short articles in a more timely manner.

If you’re mostly interested in interaction design and the appearance of forms, then we recommend Jessica Enders’s book “Designing UX: Forms” (2017). She’s done a great job of covering what’s happened since our book came out.