If you are developing a complex website whose users will come to it to carry out complex tasks then you’re likely to want to use a range of data to support your decision-making. This was the situation when I was helping the Open University develop the website used by enquirers to decide whether to sign up for a course of study. And it made an interesting case study for the first international conference on Human Centred Design – HCD 2009 – held in San Diego in July. This paper was co-authored with Whitney Quesenbery, and the OU’s Ian Roddis, Sarah Allen and Viki Stirling.

The Open University is the UK’s largest university and the only one dedicated solely to distance learning. Its 220,000 students include more than 40,000 who are studying from outside the UK. Its online prospectus “Study at the OU” is a key tool in attracting and retaining students, and is also important as the sole route to online  course registrations: more than £100 million (equivalent to US$150 million) of online registrations are taken each year.

The usability of the University’s online prospectus is clearly important to the University, and has been the subject of user research and usability studies for several years now, for example [1].

The overall responsibility for development of the Open University’s web presence is led by Ian Roddis, Head of Online Services in the Communications team. He co-ordinates the efforts of stakeholder groups, including developers, usability consultants, the academics, and many others.

The team is committed to user-centred design, both by involving users directly in usability tests, participatory design sessions and other research, and indirectly through a variety of different data sets, including search logs and web tracking.

In this paper, we describe three examples of the way we use measurement to inform development:

There long been discussion in the usability community about the ‘right’ number of participants for a usability test; to give just three of the contributions to the arguments, there is the claim that five users is enough [3], the rejoinders that five users are nowhere near enough [4], and discussion of the mathematics that can help you to discern how many users you need [5].

We prefer to think in terms of iteration between usability testing, typically with five to 12 users, and the use of  other data sources – a view supported by Lewis [6].

Each of these methods informs the others, providing direction about possible usability problems and design solutions. In addition, when we see consistent insights from both analytics and qualitative evaluations we have greater confidence in the results of both methods.

For example, in one round of usability testing on the prospectus we noticed a problem. Users found it difficult to work with the list of subjects: 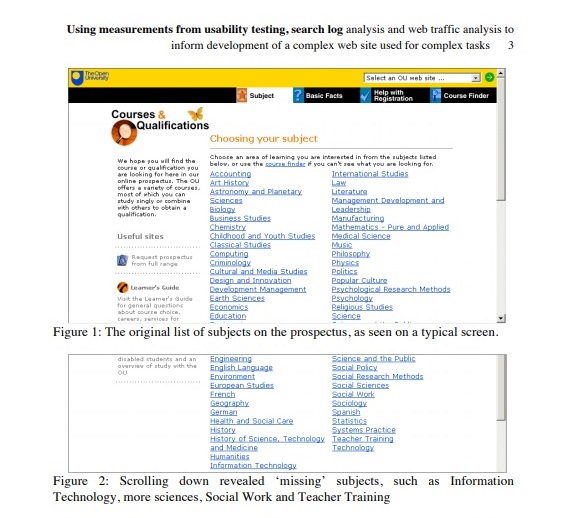 We could have done more testing with more participants to measure exactly how much of a problem this was, but instead we opted instead to note that it was a problem and to look for ways to understand the behaviour in more depth. We decided to use web analytics to look at the relative numbers of visits to the different subjects, and the likelihood that a visitor would combine exploration of two different subjects in a single visit.

We looked at the content of these two subjects and discovered that visitors should really think about both of them before choosing either. The interface, however, did not present them in a way that encouraged this comparison. Indeed, some visitors might not understand the difference between these two subjects, as taught at the Open University.

We also see from Figure 3 that there are clusters of related subjects. For example, visits to Education or Teacher Training were unlikely to also include visits to Computing or Information Technology. 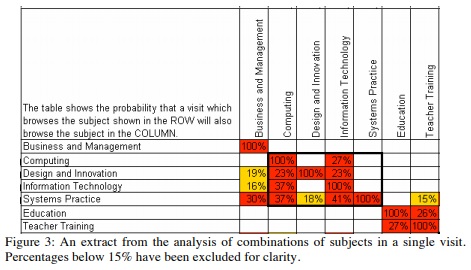 From this type of analysis, across the entire list of subjects, we recommended a new design with a much shorter list of subject areas based on actual user behaviour, and the clusters of subjects they tended to view together. We were also able to use this analysis to recommend a user-centered view of the subjects, rather than one that simply reflected the internal structure of the university.

Once a new list of subjects was designed, we ran usability tests to determine whether they improved the ability of visitors to find the subject that best matched their goals for study at the OU. These usability tests allowed us to continue to test and refine the list of subjects, adding a deeper understanding of how visitors were interpreting the terminology we chose. For example, our initial analysis showed that visitors tended to group ‘Criminology’ with ‘Law’, so we grouped them together. Usability testing showed that participants interpreted this as implying that the two subjects were closely related, whereas in fact Criminology as taught at the Open University is about the sociology of crime.

We wanted to establish a baseline measurement of the usability of the prospectus before a major new release. The choice of technique seemed obvious: conduct summative usability testing, asking representative users to attempt an appropriate range of tasks.

what tasks should be measured?

Broadly, the online prospectus has to support the user task “Find out if study at the Open University will allow me to meet my educational goals, and if so sign up”. This task is a complex one. 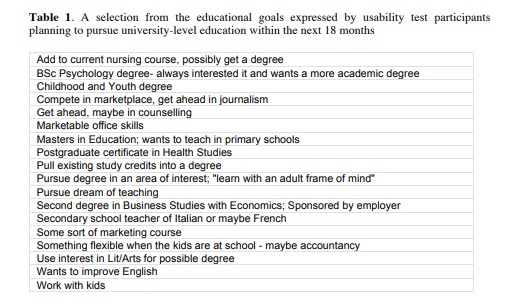 Clearly this is a complex task, so we looked to the literature for the related domain of complexity in software. One of Mirel’s suggestions on this point is to “Describe the task landscapes that users construct for their patterns of inquiry and subgoals” [7]. In terms of measurement, we interpret this as breaking the complex task into smaller tasks that relate to the whole. Two obvious ones were:

When we examine our search logs, we find that subjects, courses and specific jobs dominate, as can be seen from the list of top search terms in Table 2 below. As is usual with search analysis, we find that the top few search terms are strongly indicative of the searches in general [8].

We also found that external search (search terms entered in Google) is dominated by terms such as ‘open university’, which we interpret as markers of the visitor’s intention of getting to the Open University website specifically [8]. Stripping out those markers, we found that search will bring visitors to many different entry points in the web presence, as shown in table 3. 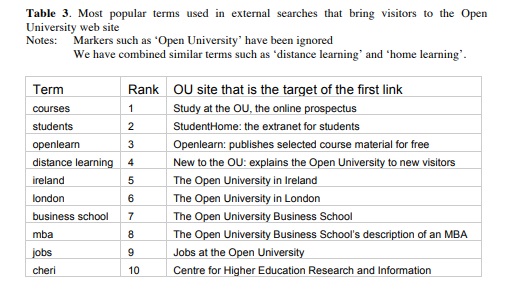 using web traffic analysis as a source of tasks

Our next source of data was the traffic analysis. We wanted to find out whether the users tended to stay on their arrival point within the University’s web presence, or whether they tended to move across to the part of the website that we particularly wanted to measure: the prospectus, Study at the OU.

Figure 4 illustrates traffic flows into the “Study at the OU” prospectus sub-site from external sites (shaded area) and other parts of the OU’s web presence. We found that the two biggest flows of traffic into “Study at the OU” are from Google and from the Open University’s home page, as we expected. But we also found important flows from many other websites within the overall OU web presence, and we found that a wide range of websites had some flow. Broadly, any visitor to the OU’s web presence was likely to end up on the prospectus at some point  during their visit.

This added a third element to our mixture of tasks: 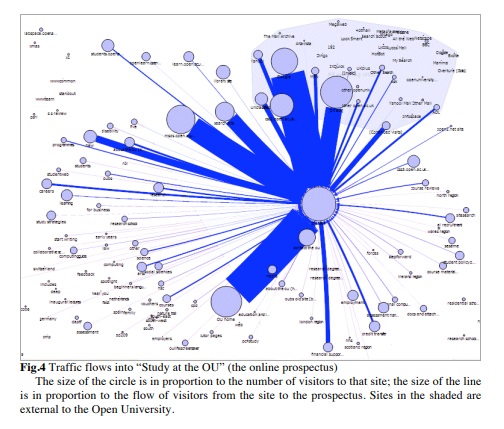 the set of tasks used for our measurement

The final set of tasks reflected all of these considerations:

By using the site and search analytics to construct the tasks we could be confident that the summative test would reflect typical behavior. It also meant that the tasks were relevant to many of the participants, making their behaviour more realistic.

A third way we use measurement is to establish whether something is important enough to require further attention. For example, Google is a crucial source of traffic for this site, as for so many others. For some time, Google provided a set of site-specific links as part of the results for selected sites. In 2008, Google introduced a new feature into its results for selected large domains: a site-constrained search box (figure 5, below).

We wanted to know whether this box had affected user behaviour. Were visitors using it? Did we need to think  about exploring it in our next round of usability testing?

use of the ‘site’ box is negligible

The site-constrained box has the same effect as using the Google ‘site:’ feature in their advanced search: it performs a Google search, restricted to a particular domain. In March, these searches were referred with ‘site:www.open.ac.uk’ appended to the search term. By July, Google was referring them with ‘site:open.ac.uk’ appended.

We therefore analysed search logs from three different weeks: before Google introduced the search box, immediately after, and some months later. We looked for search terms that included the indicator terms “site:www.open.ac.uk” or “site:open.ac.uk”.

The analysis showed that use of the site-constrained search box was a negligible proportion of total visits, well under a tenth of a percent (fewer than one in a thousand), and that we could safely ignore the feature for the moment.

Unsurprisingly, our conclusion is that we get the best insights when we combine data from whatever sources we can lay our hands on, and we continue to iterate between different approaches according to what we find and the questions that we want to answer. And it can be just as valuable to find out what we can safely ignore.