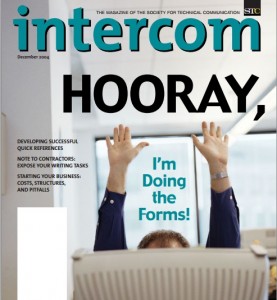 Here’s a little secret that I’d like to share with you: most people just aren’t all that thrilled by forms. They don’t like filling them in, they don’t like thinking about them, and they certainly don’t like the idea of having to design them.

But forms are the lifeblood of government and much of industry. They’re also pretty important (thinly disguised as questionnaires) in academia. A web form is the difference between a static, information-providing website and an interactive, service-providing one. Think of the life events that require filling in forms, starting with registering a birth. Or think of the zillions of everyday forms that we encounter: signing a credit card voucher, logging on to our computers, booking a meeting room.

So if you get the chance to work on a form, don’t be dismayed, and don’t turn down the job. Accept the challenge. Look at it this way: the chances are very good that you’ll improve the form, thereby making lots of people’s lives just a little bit easier.

The unpopularity of forms

Paper forms are just black marks on dead trees. On-screen forms are just coloured dots on a screen. Why, then, do these everyday objects create so much antagonism?

The first step in forms design is to understand the relationship factors. This part of information design is about understanding the person with whom you are communicating – and the purpose of that communication. Ask yourself these questions:

Were any of these questions a bit tricky? Are you sure of your answers? My experience is that often we’re working on forms without really understanding the relationship between their originators and their users. If you don’t have up-to-date user data that allow you to answer these questions easily, then it’s time to find some. Good sources of information are stakeholders such as the organisation’s marketing or customer service departments. Even better is finding a way of asking the users themselves.

Then think about the questions and messages on your form. For example, here are some ideas to start you off:

Creating a good conversation is all about good writing – and good editing, as you create text that is as short as possible while still being clear. If you’re worried that your writing skills may be a little lacking, then consider hiring a technical communicator (also known as a technical author).

If you are a writer, then here are some tips for a better conversation with users.

Use no more than 150 words in the preamble

The preamble is the instructions that introduce the form and precede the questions. But users don’t want to read the preamble; they want to go straight to the questions. If you limit yourself to 150 words, there is a chance that they may take in what you say.

Users expect to see questions grouped in some way. Make sure that each group is a coherent set of questions that they consider to be related. You can name each group individually if you wish, or call each collection by a grouping word such as ‘section’, or simply number them.

Use groups to show progress

It’s less daunting to answer seven groups of questions with six to nine questions each than to answer fifty-six questions. On an electronic or web form, you can help users by providing a progress indicator that updates as they work through the groups.

In most countries, you are under a legal obligation to safeguard personal data such as names and addresses. My experience is that only about 10 percent of users actually read the privacy policy, but most of the remaining 90% want to see some reassurance that it exists and that they could read it if they wished.

Justify your requests for private data

If users consider your request for private data impertinent or irrelevant, they will not answer these questions. On paper, they’ll just leave the questions blank. On electronic or web forms, they’ll try to leave them blank – and often will enter inaccurate data if forced to answer.

The HTML standard allows ‘Reset’ buttons, but that doesn’t necessarily make them a good idea. Users rarely want to discard the hard work that they have done to fill in the form, and many of them may not understand the word ‘Reset’. If you truly believe that some users will want to throw away all their inputs, then provide a button labelled clearly with instructions such as ‘Discard all inputs’ or ‘Throw away my work’. If your users won’t want to discard their inputs, then don’t have a ‘Reset’ button. ‘Reset’ buttons sometimes have a purpose on input dialogs, where the user may want to set changes back to an initial value. In this context, they should be labelled clearly with phrases such as ‘Discard changes’ or ‘Go back to previous values’. For paper forms, you might consider offering users a way to get a replacement form if they make a mistake.

If you are not a designer, then here’s my top insight into making a form look good: design to a grid. Draw a vertical and horizontal grid on paper or on screen, and make everything line up with it. Then remove the grid. I find that this practice helps me to make a neater form.

Here is an example. First, let’s look at a section from a typical government job application form (figure 1). 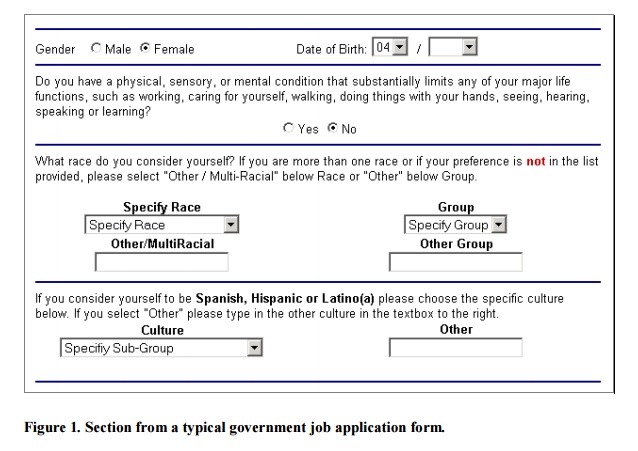 We realise the questions need some work – and that’s going to take some time as we have to get the legal department to agree to change them. Meanwhile, we can definitely tidy it up visually.

Here in figure 2 is the same form with the boxes moved about so that they align to a vertical and horizontal grid. I’ve left in the red vertical gridlines. I’ve also moved the text slightly so that the text is closer to the box it belongs to than to the horizontal dividing lines. 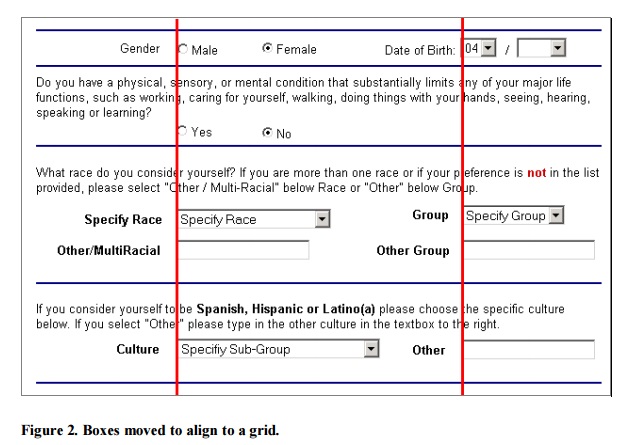 Now, let’s see the form without the gridlines. Do you agree that it looks just a little tidier, and perhaps a bit less daunting? 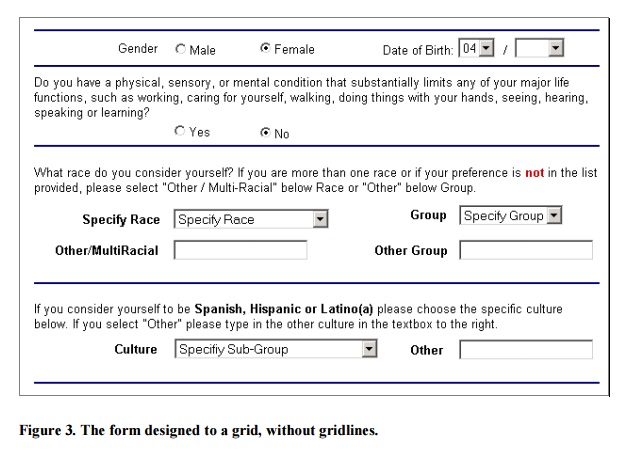 Good forms are about being thoughtful and taking care

By now, you’re probably thinking that good forms design is just common sense. You’re right. Like so much in communications design, working with forms isn’t really about thrilling insights or moments of genius. It’s much more about being thoughtful and taking care by doing the following:

Soon you’ll be finding forms as fascinating and rewarding as I do!

This article first appeared on the front cover and in the December 2004 edition of Intercom, the Magazine of the Society for Technical Communication.