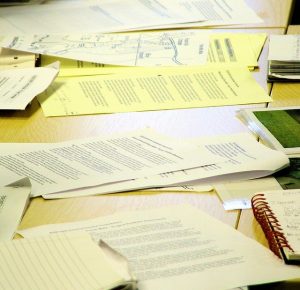 Have you ever wondered why your shiny new online form isn’t getting the use it deserves, and the boring old paper still keeps pouring in?

This month, I’ve been mostly thinking about tax forms – and tax forms on paper. It’s something that I do from time to time. Now, I do truly understand that not everyone likes thinking about tax forms, paper or otherwise – and in the UK, most people have their tax dealt with by their employers and don’t have much to do with tax forms. But this is an international column and I’ve been having an international month. And there are some insights here that I think may apply to forms in general.

I have been doing a bit of digging into the statistics. In the USA, pretty much everyone has to do a tax return and, by 28th April 2006, the IRS had received about 38 million of them from people who don’t use a paid preparer – only 21 million electronically. That’s about 55%.

In Australia, pretty much everyone has to do a tax return and the most recent statistics I could find said that about 2.9 million Australians do their own tax, about 1 million electronically. That’s about 34%. In both countries, electronic filing has been around for quite a while, isn’t excessively difficult, and has the advantage for most people that they get a quicker refund.

And it led me to wondering: why do people persist with paper forms?

So I did some asking, and I’d like to thank the nice people on BFMA Formspace and on the STC Usability SIG discussion list who took time to answer.

Even today, some people don’t have a computer – or don’t have a computer at home. If they do have one, they don’t necessarily trust it with their financial information. And if they do trust it with their financial information, that trust may not extend to the internet. “Although my wife and I have been hardcore Mac’rs since 1984, she still does not trust the internet to do business”.

Solution? ‘No computer at home’ is a tricky one. But trust we can do something about.

Some people are reluctant to pay for special software to do something that they can do for free on paper. But there is also the cost of time and effort: time to tackle the switch, effort of doing so.

Solution? This category resonated with me, as last year the government persuaded me to switch from filing my employer’s end-of-year return on paper to filing electronically. How did they do it? By offering a large enough financial incentive. Yes, it was good old-fashioned bribery that had me knuckling down to it. But another, longer-term solution would be to make the electronic form genuinely easy to use. People do talk to each other and the rumour that it’s OK starts to spread.

A lot of tax is about assembling information from various sources into an answer for the form. If those sources are mostly paper, then it seems natural to carry on using paper.

Solution? This one has to be tackled with the information providers. If you send out forms or other records: could they be offered electronically? Could you even (gasp) think about making your form work like the Swedish tax system or the UK Companies House return, where the form gets filled out by the official authority and the recipient merely has to check it and make any necessary amendments?

Even though most of us don’t get a nicely filled-in form from our taxation authority, we do get something, usually a form, that tells us that we have to fill it in. So here in my hand, I have a paper form. Sort of tempting to keep it that way, isn’t it?

Solution? How about asking people if they’d prefer a different method? I have not yet seen a question saying: “Next year, would you prefer an electronic notice?” or something similar. But why not?

I’ll admit it. The paper form doesn’t stay long in my hand when it arrives: it gets filed straight away into the ‘do it later’ pile. And stays there, with occasional outings when I deal with bits of it. And my experience certainly isn’t unique. To-ing and fro-ing, doing bits and changing them, splitting the task up to fit available time: all of these are easier on paper. “If I have to fill out the form over a couple of days it’s clear where to resume my work. It’s more complicated to manage an electronic form”.

Solution? Better technology would help. Does your electronic form allow users to skip about, filling parts in when convenient? Can they easily see what they’ve finished and what is left to do? Most of all, does it politely look after the form for them – or (horror) does it time out and trash their work? Program in plenty of flexibility and you’ll help to win them over.

Closely related to the problem of sporadic completion is the problem of seeing the whole task. “Any complex task seems easier to handle when it is spread out in front of me on the kitchen table, rather than done on a computer, where I feel confined and limited and unable to see everything I feel I need to see”.

If you’re trying to relate multiple pages of questions, variable amounts of instructions, and all sorts of sources with the answers: at least having it all on paper means that you are limited only by the size of the table you set it out on.

Solution? Probably it’s better technology, again – as above, and also letting users ‘flip through’ the form, maybe even allowing them to try ‘what if” entries.

As well as the conceptual type of ‘seeing’, getting the whole thing in perspective, there is the physical reading of the form. Paper doesn’t work differently from one browser to another. It’s generally printed using more dots per inch than a computer monitor will ever have. And you can pick it up and hold it up to the light to read it better. “Can read the finer print more effectively on paper”.

Solution? Make sure your electronic form is accessible and flexible: increasing and decreasing text sizes, changing font, changing contrast. Anything to allow them to tune it to make it legible.

Possibly the saddest replies were those from people who had tried using electronic filing but had a bad experience. Password problems, technology crashes, rejected entries: whatever it is, if you are required to do something and the technology gets in your way, then it’s back to good old familiar paper. And it’s very difficult to persuade this group to try again.

Solution? Accept that you may only get one chance to convince your users that electronic works for them – and make sure that you’ve done everything you can to make it usable, first time.

Although I’ve tried to suggest some solutions that would maybe help make electronic forms more acceptable to the people who prefer paper today, there’s no getting away from one of the reasons I was given: “I’m proud of my handwriting”. And that leads me to my final point.

Paper will always be a better “solution” for some people. It’s flexible, familiar, and portable. So treat the paper as another part of the user experience, design for it, and make it as usable as your electronic equivalent. You’ll never win everyone over.