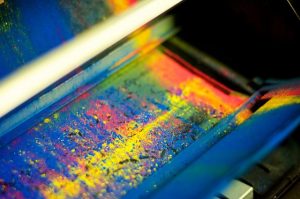 My printer died. It was a Xerox Phaser 8200, a colour printer that uses ‘solid ink’ technology. I liked it a lot because it was quick, high quality, and the solid ink is relatively inexpensive. It had done well for quite a while and was well out of warranty. A quick call to Xerox and a browse around printers revealed that I could get a new one for about twice the price of a repair.

So I took the plunge, shelled out £1000 (OK, that does include VAT, extra ink and extended warranty – but that was the hit on my credit card) and ordered the current model: a Phaser 8500DN. This is a BIG printer so I arranged for the kindly downstairs neighbouring business to help me get it up the stairs and expected to be printing again the next day.

I open the box, extract the docs, and there’s a disk: ‘watch this video demonstration before installation’. It’s branded Xerox and it’s included in the Xerox box, so naturally I assume it’s a Xerox product. Put it in the computer, it requires a plug-in I don’t have. Follow the links for installing said plug-in and it eventually lands me on a screen with a choice of two and no indication which one I need. Abandon demonstration.

Printer requires electricity which means a power cable. On this model, the power inlet is on the side behind a dinky plastic door. Open door. Plug in cable. Try to close door. It won’t close. Try a bit harder. Now it does close but 240V power cable is kinked over in an alarming way. Wasn’t I taught that cables shouldn’t be kinked? Open door again. Now it looks stupid. They must have supplied the wrong cable. Instead of being a ‘straight on’ one as supplied, it should be a ‘left hand’ one (where the socket is at 90 degrees to the actual cable). Decide to leave the door open for the moment and ring up about the cable later.

Following the paper instructions closely, I power up the printer. It starts up for 20 seconds and then shuts down. Again and again. Can’t ignore this problem: I’ll have to call.

So now I’m on the phone to Xerox customer support. ‘Please can you give us the serial number of the printer.’ I read it out. ‘That can’t be right. That printer is still at the manufacturers.’ I explain, politely, that it is in fact in my office – not working. Eventually, I convince the support person to accept my reasoning that I’m calling because I really have purchased the printer. Then I try to report the problems. She accepts problem 3 and logs it. She listens to problem 2 but I don’t think she took any notes about it. She flatly refuses to have anything to do with problem 1. Well, at least I got attention to problem 3. I explain that I’m out of the office all day the next day and we arrange for an engineer to call the day after.

I get to the office nice and early so that I’m there for the engineer. No-one appears. Around lunchtime, I call support. The engineer tried to come yesterday.’ I point out that wasn’t what was agreed. Eventually, and with some difficulty, I manage to get the engineer to contact me and we re-arrange the visit.

Let’s skip the other problems…

By now, you’re probably bored with my printer problems. So I’m going to skip the bit where eventually, the printer does start to work, the engineer provides a new power cable (out of his own pocket, I suspect), and then I can print from one computer but sometimes not from the other one (due, I find out later, to the printer driver ignoring instructions from Word). And each time it fails to print, I do get some much-needed exercise as the driver won’t let me cancel a printout from my computer – I have to walk right around the room.

Well, at least it’s 20 steps towards my 2000-a-day target, isn’t it? Who cares that I’m cursing loudly every time?

…And get to the point

OK, it’s three weeks later and my printer is churning out happily – from both computers. It’s faster than the old one and I’d love to be able to recommend it to you. It’s a great printer if you can survive the inept way that Xerox dealt with a series of problems – some of them minor, but all of them problems. Or is this beyond inept? I was moaning about all this on a list and someone suggested that I should report it to Xerox’s VP for ethics. So that made me think about three possible ethical implications of my experience.

Ethical point B: caring for staff

When you send support staff to a customer’s site: shouldn’t you ensure that they have all the information and parts they need? That means passing on not just the technical details of the problem but also any other information provided by the customer such as appropriate times to call. And it means making sure that you have an adequate level of parts before you start to ship a product. Is failing to provide staff with the things they need unethical? Or is it merely inept?

If a customer has a legitimate problem, you should pay attention to it. That means having a way for all problems to be reported up the chain: usability, configuration, and driver problems just as much as hardware failures. Is selectively ignoring customer problems unethical? Or is it merely inept?