“Choose a single question and get it in front of some users” – that’s what I wrote myself in my aims for the survey book I’m currently writing. 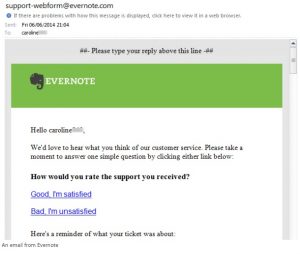 Evernote recently sent me an email that corresponds to that advice. The single question was: “How would you rate the support you received?”

And it’s made me revise my advice. Being a single question isn’t quite good enough. It’s got to be a good question – one that users:

My problem with Evernote’s question? Let’s run through those steps:

It offered me two choices: “Bad, I’m unsatisfied” and “Good, I’m satisfied”. Neither works. The support agent wasn’t good: it took several emails for him to understand that I didn’t understand the lack of the feature. But he wasn’t bad either: we did get there in the end. And I’m both unsatisfied with the lack of the feature, and satisfied with other aspects of Evernote.

(Although I’m not exactly thrilled that they have addressed me by my name in lower case with a 3-digit number of their choice added to the end. That seems disrespectful).

So sorry, Evernote, no click from me. But thanks for the opportunity to think through one aspect of my book.