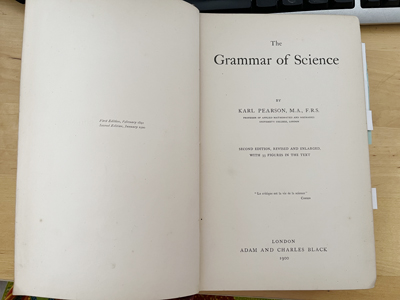 Karl Pearson, 1857-1936, was a professor of applied mathematics and mechanics. He was one of the major figures in statistics, especially medical statistics. Depressingly, he was also a eugenicist and racist – two things that I regret that I overlooked when I decided on a whim to buy his best-seller “The Grammar of Science” that first came out in 1892.

Such was the popularity of the book that it is still in print. It’s possible to pick up a second-hand copy of one of the later editions or reprints for about £10 (USD $15). I went for one of the earlier ones, a second edition dated 1900. I clearly remember being surprised that I was able to read about the book and then a few days later to have a book that was 120 years old in my hands. I think I paid £20 (USD $25) including shipping.

It’s a strange sort of book. The ‘Introductory’ is an exposition of the scientific method. For example:

The unity of all science consists alone in its method, not in its material.
(Pearson, 1900)

And some things haven’t changed:

Facts and their classification have been accumulating at such a rate, that nobody seems to have leisure to recognise the relations of sub-groups to the whole.
(Pearson, 1900)

and the rapid spread of what we might now think of as viral misinformation was right there in 1900 too:

There is a certain school of thought which finds the laborious process by which science reaches truth too irksome; the temperament of this school is such that it demands a short and easy cut to knowledge, where knowledge can be only gained, if at all, by the long and patient toiling of many groups of workers, perhaps through several centuries.
(Pearson, 1900)

But I didn’t get very far before I started to encounter passages that I couldn’t agree with, such as this quote that manages to be colonial, misogynist, and rejecting of neurodivergence all in one short sentence:

The universal validity of science depends on the similarity of the perceptive and reasoning faculties in normal civilised men.
(Pearson, 1900)

I’m prepared to suspend judgement to a point, as the language of 1900 is clearly not the same as it is today – and even Pearson managed to have a more respectful view of women a bit later in the book – but as I progressed, I began to wonder why I’d bought it (which I could no longer remember). 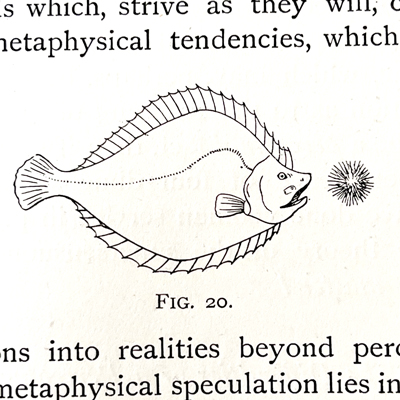 When I read, I like to add sticky notes or index flags to pages where points catch my eye. I can see from the stickies that I didn’t find much to catch my attention once I got to the chapter on Probability.

For years, I’ve struggled with too many tedious books because of the erroneous belief “if I give up on reading a book before the end, it’s a failure”. I’m proud to say that I bailed on Pearson well before the end, and my copy is now on its way out of the house.

If you enjoy buying old books for the fun of reading something from 1900 and the special smell – by all means go for this one. Otherwise, don’t bother.

Although I did really like the drawing of the flounder. Why it’s in the book, I don’t know.

"I don’t believe that work has to be either an all-consuming passion or no more than a paycheck.

There’s nothing feminist about asking women to choose between two shitty options."

I wrote about the end of girlboss, "anti-ambition," and meaning at work. https://medium.com/nice-work-from-active-voice/where-do-we-put-our-ambition-now-71b37ee01869

So. I was about to remove Twitter feed from my site (access to user-generated online content) to take it out of scope of the Online Safety Bill when the bill was postponed. Now an investigation by @torres126CP, prompted by posts by @webdevlaw, says links have to go too. Gah.

A follower‼️who is a high school student‼️FOI'd DCMS to dig into the #OnlineSafetyBill's impact assessment on every side project - including theirs - deemed collateral damage in the vendetta against Big Tech.

In today’s episode of “Fix the forms, one at a time”, @FarrarTamara describes how @NHSDigital is making an important service truly inclusive.
- research with seldom-heard-from people
- recognition that some don’t have a current address
- just as much care for paper option

'At times, the situations and experiences we heard about were a real life lesson for us to learn from.'

For those at the back: you don't need to compare making something "easy to use" with "your mum could use it". It's an outdated, lazy analogy to insinuate women/mums aren't technology literate. I'm a mum. I also have a computer science degree. And so do many, many others #uxdesign