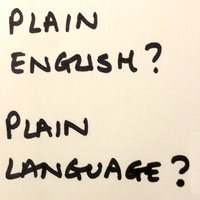 When a user says to you “why can’t they write in Plain English?”, that’s a very reasonable request for us to think harder about how we are writing content.

Plain English is a series of techniques

In the UK, Plain English is usually defined in variations of this sort of phrase: “simple writing without jargon that everyone can understand”. To write in Plain English, we are told to use a series of techniques such as “use short sentences” and sometimes given lists of words to avoid.

This version of ‘plain’ originated with Ernest Gowers’ Plain Words, a pamphlet commissioned by the Treasury (a government department) in 1948 that was supplemented by a second pamphlet The ABC of Plain Words in 1951, and then got combined into a single book The Complete Plain Words in 1954. You get the flavour of Gowers in this excerpt:

These words are rarely needed, for the simple word use will almost always serve. The official (not a Government official) who wrote “This document is forwarded herewith for the favour of your utilisation” might have written “please use this form”. That says what needed to be said in four syllables instead of 21. Gowers, 1954

Although Gowers’ books were and continue to be enormously popular, official writing in the UK remained a rich source of confusion. In 1979, two advocates for clearer official writing formed the Plain English Campaign, a commercial consultancy that has successfully marketed itself as the arbiter of Plain English in the UK.  Its two founders, Chrissie Maher and Martin Cutts, campaigned together until a series of disagreements ended in Martin Cutts departing from the business. He later created a rival consultancy, the Plain English Commission, that has a lower profile. Cutts published his version of the story: Nailing the lies of the Plain English Campaign.

Despite this rift, Plain English in the UK became dominated by the set of techniques advocated by the Plain English Campaign, which unfortunately rarely included actual testing of the content with users. So the bit about “that everyone can understand” got forgotten, while the “simple writing without jargon” became the focus.

Simple writing is not a bad thing – but it’s definitely not everything. For example, for quite a while the Plain English Campaign advocated a ‘Crystal Mark’ that could be achieved by following its techniques but without testing the content with users. The difficulty arose that there was no guarantee that users could actually use the content with the ‘Crystal Mark’. For example, here is a comment from an investigation by the National Audit Office of leaflets issued by the Department for Work and Pensions with the Crystal Mark:

NAO research with a small group of customers using 11 key leaflets, asking them 16 simple questions (such as “how do you go about claiming Job Seekers Allowance?”), found that only four of the 16 tasks could be completed satisfactorily.
Department for Work and Pensions Resource Accounts 2004-2005 – National Audit Office (NAO) Report

Plain language focuses on the users

Meanwhile, also in 1979, Ginny Redish (Janice C. Redish) in the USA founded and led the Document Design Center at the American Institutes for Research in Washington, DC, focusing mostly on improving official documents. She has always been committed to testing content with users, and co-wrote one of the first books on usability testing.

Her definition of plain language puts users at the centre. The version that I use myself is based on hers:

Your content is in plain language when your users can:

within an amount of time and effort the users consider appropriate. (Caroline Jarrett adapted from Ginny Redish).

If you prefer a government source rather than my definition, have a look at the USA Government’s plain language website.

A more formal version of Ginny Redish’s definition became part of the definition used by the International Plain Language Federation, which also includes translations of this definition in over 20 other languages:

“A communication is in plain language if its wording, structure, and design are so clear that the intended readers can easily find what they need, understand what they find, and use that information.”  International Plain Language Federation

There’s a lot of confusion because many of the techniques that we use to achieve plain language are the same things that the Plain English Campaign recommends. For example, on my editing that works website, I also urge writers and content designers to write short sentences.

There are two main differences between the two approaches:

Be careful when you search and link

Does it matter whether we talk about ‘Plain English’ or ‘plain language’? Not really: when talking to users, either is fine.

If you are searching for definitions or techniques, or you want to link to a source of accurate plain language information, then it does matter. If you want to create traffic and publicity for one particular commercial consultancy, then you are welcome to link to the Plain English Campaign (although I’d like you to consider linking to its rivals such as the Plain Language Commission as well).

If you want to link to internationally respected sources of advice on plain language, then consider these: