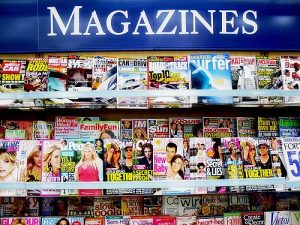 As I write this, it’s the run up to Christmas and I’ve reached the point where anything now left undone on my to-do list is going to stay that way. So I thought I’d change focus slightly from my normal fare of web pages and paper forms to think about magazines.

A bit of background

For those unfamiliar with the genre, pop into your nearest newsagent, supermarket or petrol station and look for the mags. In the ones that I frequent, they usually seem to arrange their stock like this:

newspapers lying on the floor;

magazines about technical things like cars, bikes, computers, etc. on the lower shelf;

magazines about home-making things like interior decoration, fashion, cooking, etc. in the middle;

and a top shelf with things that aren’t really suitable to mention on a well-mannered website like this one.

Today we’re on that middle shelf, which in these politically correct days are known as ‘lifestyle’ magazines – but let’s be honest and admit that the majority of the readership is female, as a flick through the content will demonstrate.

If you don’t feel like venturing out to see one for yourself, then Good Housekeeping (my favourite) will give you a flavour.

So what has that got to do with usability?

But that’s not what I wanted to muse upon this month. The one that caught my eye was a new title: Psychologies. Its website claims:

‘Welcome to Psychologies, the first women´s magazine that is about what we are really like, not just what we look like. If you are interested in the ways we think, behave, communicate and connect, then this is for you…’

Sounds good to you? Well, thinking about how people behave, communicate and connect seems to be a major facet of usability to me, so I gladly slapped down £2.50 or whatever it was and settled down to read it during my next bit of travel.

And does it deliver?

If you tore off the cover, you would have a somewhat down-market version of Good Housekeeping. More scandal and celebrities, worse recipes, and certainly no usability testing. I’d say that at least half the magazine makes no attempt at all to consider the psychology of anything, and the rest didn’t impress me. Maybe the first issue was misleading. Maybe, if I could read French better, I’d be inspired by the website of its parent magazine (but maybe not, as I do read enough French to have discovered that the content is about the same).