In the chapter on Goals, I talk about why you are doing a survey. It’s focused on “The reason you’re doing it”, the first tentacle of the Survey Octopus.

The topics in the chapter are:

The error associated with this chapter is Lack of validity, which happens when the questions you ask do not match the reason why you are doing the survey and what you want to ask about.

I couldn’t give all the appropriate origins and suggestions for further reading in the chapter, so here they are.

The matrix was inspired by Christian Rohrer

I’ve used a four-way matrix in the section about “Check that a survey is the right thing to do”. My matrix compares “Observe” and “Ask” with “Why” and “How many?”, and I have chosen a limited range of methods to compare: Interview and Survey for “Ask”, and Usability test and Field study, and Analytics and A/B tests, for “Observe”.

If you’d like a bigger matrix with a richer choice of methods, have a look at:

Wendy Gordon’s, Goodthinking: A Guide to Qualitative Research (Admap 1999), is also useful. Twenty years ago she was one of the few people in market research who looked at doing observational research as part of the user research mix. At the time her book was a classic, setting out state of the art thinking and practice in focus group research- a reminder again that surveys are not your only choice.

In the book, you’ll find a “Route around the matrix” for a survey that starts with interviews, moves to usability tests, and finishes at a survey. I didn’t include any quantitative methods because for a Light Touch Survey, I find that I get better results if I focus more on iteration, using the mixture of methods in that route.

If it’s a Big Honkin’ Survey that you’ll use to make a big variety of different decisions, then definitely you’ll want to test it with plenty of A/B tests and other types of experiments. For some ideas about how to do it, have a look at the work of the US Bureau of Census. They do constant experiments because of the size and importance of the surveys that they run.  Their papers are in a huge library:

That’s typical of survey methodology as a profession.

If you’d like to keep up with the sorts of experiments being done by survey methodologists in general, then good places to start are:

You need to think about ‘the number’ before starting your survey

Early in Chapter 1 I suggest you ask what ‘number’ you need in order to make a decision. It may appear too soon in the survey process to look at how we get from “the answer to a question” to “a number to make the decision”.  But statisticians will tell you that you must work out your statistical strategy before you collect the data, not afterwards.

A useful resource while you are thinking about the number is John Allen Paulos’ book A Mathematician Reads the Newspaper. It’s a fairly light and accesible introduction to how numbers work.

Below, my guide to understanding descriptive statistics – for which there was no room in the book.

Work out your statistical strategy: how to understand descriptive statistics

There are a number of types of statistics that are relevant for surveys:

In this spotlight, we’re going to think about some descriptive statistics.

The ones that I use the most often are the simplest:

n – the number of entries in the data set

‘n’ is an abbreviation that handily saves you from typing out ‘the number of entries in this dataset’. When we’re looking at a dataset of responses to a survey, n is the number of responses.

Min and max are particularly useful for checking whether your data are plausible. Could anyone really have an answer this big? Or this small?

Range is convenient for comparing two data sets or as an abbreviation for talking about both maximum and minimum at the same time.

Mode – the most frequent value

The mode is often very useful for making decisions: for example, creating a ‘happy path’ for the most frequent type of customer.

Here’s an example from a data set about a conference. The organisers wanted to know whether to include a souvenir from their city in the conference swag bags. I took a quick look at the data, in this case the city of each participant.

The mode? People from the conference city! The idea of a souvenir lost its lustre. Instead, the organisers pleased the mode by opting for donations to charities based in their city that also had activities across their whole country, which was fine by the attendees from the two other cities. The few attendees from other countries could buy their own souvenirs.

You won’t hear much about modes in statistics textbooks or college courses. That’s because despite the usefulness of modes for practical decisions, they don’t have convenient mathematical properties.

Median – if you arrange all the values from smallest to largest, the median is the one in the middle

Medians can be handy because they are not affected by a few very large or very small values – but like modes, they don’t come with many helpful mathematical properties.

Which brings us to the arithmetic mean, usually just referred to as ‘mean’.

I’ve chosen the ‘arithmetic mean’. For the statistical enthusiast, there are some others, too, but the arithmetic mean is the only one I’ve personally found useful, so that’s the one I’m sticking to.

A mean is sensitive to outliers

Unfortunately, means do have quite a big problem: they are easily distorted by an outlandishly extreme value. 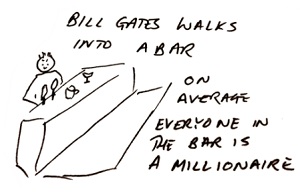 There’s a popular statistical story: “Bill Gates walks into a bar, and on average everyone in the bar becomes a millionaire”. Bill Gate’s wealth is so great that if you add it into any calculation of mean wealth, it will send that mean soaring.

If you design for a mean, you may design for something that’s not very relevant to most people. Here’s a table comparing some actual data – US household income collected by the United States Census Bureau in 2018.

Figure: Median and mean US household income in 2018  Source: US Census Bureau

Modes are sensitive to banding

Modes have their problems, too.

This is not a criticism of the Census Bureau, as I know that they publish vast quantities of data that you can choose to use in all sorts of ways.  It’s an illustration of how modes can change, to point out that if you want to use a mode in order to make any decision, you need to think through exactly how you’re going to collect and display the data that creates the mode. As so often, we have to grapple with all the tentacles of the Survey Octopus at once.

Some statistics tell us about how spread out the data is

Mean, median and mode are all “measures of central tendency” – they tell you what’s happening in the middle of your data. Our next measures are about how spread out it is.

If you subtract the mean from all the values and then add up what you’ve got left, you always end up with zero. (Try it in a spreadsheet). That’s why the variance squares the differences before adding them. But squares are a bit more difficult to work with so it’s more usual to use:

Standard deviation (s.d.)  – the square root of the variance

The special mathematical properties of means and Normal distributions will come in handy when we are looking at Statistical Significance in another spotlight.

Think about the sort of number you need

For now, when working out what decision you’ll make based on your survey: think about what sort of number you need.

Is it the actual number of people who answer a question in a particular way? For example, if your survey is about planning an office move then you might want to know how many people say that their commute to the suggested new location will become excessively long.

Is it the proportion who answer one way rather than another? For example, will you go ahead with a new feature if more than 75% of customers say they need it?

Are you looking for a mean? For example, if the office move increases the mean commute by more than an hour, will that kill the idea?

Are you looking for a median? Many surveys by National Statistical Institutes, such as the household income one we looked at earlier, report means and medians because of the differences between the two concepts.

And for design, I’m often looking at modes: I need to know which answer is the most frequent. So I have to think very carefully about whether to offer a question that has response options in bands (usually not for modes), and how to group my answers.

Or something else? I’ve lightly touched on the basic descriptive statistics. You may be doing a modelling survey where you’ll do all sorts of advanced statistical manipulations, or something quite different.

Whatever you’re planning to do with the answers to your survey, some thought at this stage about those statistics will be well worth the time you put into it – and may send you back to have another review of your Most Crucial Question and how you plan to use it.

If you want to read a different angle on goals then David F Harris starts his book, The Complete Guide to Writing Questionnaires: How to get better information for better decisions with some relevant thoughts on planning research to support your decision-making. It’s published by I & M Press, 2014.