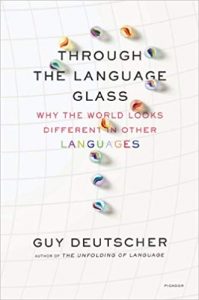 Many of us will be doing a lot of gift-giving this month, so I’ve chosen a book that would be just right for someone who enjoys something thought-provoking and a bit out of the usual: Through the language glass: why the world looks different in other languages by Guy Deutscher (2010; paperback 2011).

One for fun – or to provoke some thought

My recent picks have been worthwhile, but not the easiest to read. This one is more fun, but it also got me thinking.

First, the snags – and my take on them

If you look on Amazon.com, you’ll see that the book gets rather mixed reviews – mostly for two reasons:

There are also some complaints that it’s too long and too wordy. I agree with the two snags, but definitely not that it’s too long: it’s only 245 pages of text, plus notes, and I would have loved it to be three times as long. Maybe it is a bit too wordy, but it rattled along and I found the stories engaging.

Learning about languages and colours

A better title for the book might be “How languages deal with colour”, the main topic.

Deutscher begins with Gladstone’s monumental treatise on Homer, published in 1858. The section of Gladstone’s work that interests Deutscher is the one that points out that Homer rarely used colour in his descriptions, and the few examples of a colour description can be quite odd. For example: ‘wine-dark sea’. Why describe the sea as the same colour as wine? Isn’t the sea blue, whereas dark wine would be dark red?

Along the way, he throws in a couple of chapters on the different ways that languages deal with gender and on egocentric compared to geographic systems of co-ordinates (e.g. is something to your left, or to the north of you?).

Here’s a section of the discussion of gender:

“The original sense of ‘gender’ had nothing to do with sex: it meant ‘type, ‘kind’, ‘race’ – in fact, ‘gender’ has exactly the same origin as the words ‘genus’ and ‘genre’. … [Linguists] nowadays use it for any division of nouns according to some essential properties. These essential properties may be based on sex, but they do not have to be. … The African language Supyire from Mali has five genders: humans, big things, small things, collectives, and liquids. Bantu langauges such as Swahili have up to ten genders and the Australian language Ngan’gityemerri is said to have fifteen different genders, which include, among others, masculine human, feminine human, canines, non-canine animals, vegetables, drinks, and two different genders for spears (depending on size and material).”

All of this had me thinking about how we classify, and why, and how our cultural context influences that classification. In UX, we don’t worry all that much about spears, but don’t we just love the subtleties of whether we describe something as UX, UI, HCI, interaction design, or whatever?

Let’s return to colour, which is the major focus of the book. It turns out that there is a sequence of development of terms for colours in languages:

If you find that fascinating, then this might be the book for you. If you already knew it, then maybe give the book a miss.

An informal style of writing that I found appealing

Here’s one of Deutscher’s points about the colour sequence:

“There is undoubtedly something biologically special about our relation to red: like other Old World monkeys, humans seem to be designed to get excited about it. I once saw a sign in a zoo that warned people dressed in red not to venture too close to the cage of a gorilla. And experiments with humans have shown that exposure to red induces physiological effects such as increasing the electrical resistance of the skin, which is a measure of emotional arousal.”

I love the throw-away reference to Old World monkeys, and this passage is typical of the way he brings in personal anecdotes, and lightly-done appeals to the research. He offers notes in the back of the book if you want to follow up, but this is definitely not the type of book that makes you negotiate long reference lists or wrestle with p-values.

I started reading it because I rebelled from my usual pile of statistics books, and the way it’s written appealed to me so much that I found myself lost in it like a novel, a real page-turner.

Why do I think of this as a survey book? I have to admit it’s a bit of a stretch. You won’t find anything in here about asking questions, constructing a sample, or dealing with the analysis of a data set.

But it did make me think about how other people think, and why my assumptions about those thought patterns might be wrong. That’s a crucial skill for anyone who is doing survey research.

For example, Deutscher points out: “Try to translate a dishwasher operating manual into the language of a tribe from the Papuan highlands, and you will get stuck fairly quickly, since there are no words for forks, or plates, or glasses, or buttons, or soap, or rinsing programmes, or flashing fault indicators. But it’s not the deep nature of the language that prevents the Papuans from understanding such concepts; it’s simply a fact that they are not acquainted with the relevant cultural artefacts. Given enough time, you can perfectly well explain all these things to them in their mother tongue.”

Let’s put that into the context of something rather more familiar – for example, the idea of a website being easy to use. In our culture, by which I mean the one that I hope I share with you as a user experience specialist, we have all sort of different concepts that we bring to that discussion: navigation, interaction, findability, typography, branding, and so on.

Now let’s think of someone who doesn’t share our UX culture; not someone from the Papuan highlands, but maybe my friend Paul the builder. He works outdoors all day, and uses his computer possibly twice a week to check the TV schedules and follow the news of his favorite sports teams. He’d be entirely capable of grasping the difference between website navigation and website branding, but right now if you said ‘navigation’ to him it means something to do with sailing, and ‘branding’ is about burning a mark onto a cow.

What happens if a survey pops up and asks him to rate the ‘navigation’ of that TV site? Cultural confusion, that’s what. And definitely not good, useful data.

Recommended for relaxation or to get you thinking about cultural assumptions

Mostly, I picked this book because I found it relaxing and engaging to read. But if it also helps us all to review our assumptions about how other people think, then it definitely counts as a survey book.